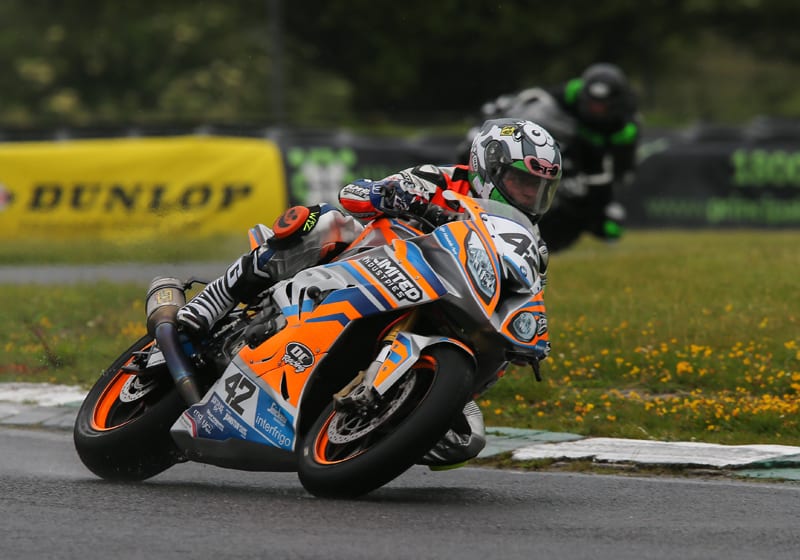 Johnston held the lead of the Dunlop Masters Superbike Championship as the series headed back to the Mondello Park National Track. The Antrim man had beaten Richie Ryan, on all three occasions at the previous event as he took three second places but was yet to take a victory.

Following a slow start Johnston found himself in a distant second after only a couple of laps as Ryan got off to a flyer in race one. Johnston then began to close the gap and with three to go there was nothing in it. In the end the flag came to soon for the championship leader who was pipped at the post by two tenths of second. Waterford’s Peter Moloney finished third with Thomas O’Grady taking fourth on the debut of his new Yamaha R1.

In race two Johnston again got5 away second but at beginning of lap two he dived past Ryan to take the lead. Ryan dropped back into the clutches Moloney who made his move on lap six as Johnston disappeared up the road. By the end of the twelve laps the Ulster rider had his first ever Superbike win on the National Track layout ahead of Moloney with Jamie O’Keeffe emerging from the four way battle to take the final podium spot.

For race three the Superbike grid was faced by the first wet race for the feature class in five years Away from the lights, Johnston was out of the top ten having had his worst start of the weekend, but by the end of the lap he was back to third and closing on Thomas O’Grady. By lap three Johnston was once again second and chasing Ryan who was initially opening the gap but as Johnston got used to the unfamiliar wet tyres he closed in. By the seventh of ten laps he was right with the leader and made short work of taking over at the front before pulling away to win by two and a half seconds from Ryan and O’Grady.

With half the season completed Johnston has increased his lead in the championship over Ryan while a non finish in race three has dropped Moloney back in third place, almost into the clutches of O’Grady. The concurrent Superbike Cup races had three different winners for the first time all season as Frank Doherty and Joe Grant were joined by first time Cup class winner Dean O’Grady, but it was Doherty who came away happiest as he closed the gap to Grant at the top of the table.

Saturday’s Supersport race one was a fraught affair as it took three attempts to run. Championship leader Raymond Casey from Cork was eliminated in the first start following a nasty accident as his brakes failed heading into turn one. On the second attempt the race got to lap four before it was stopped, leaving a six lap re-run to decide the result. Michael Owens led initially but he was passed by Luke O’Higgins on lap two just before he crashed out. O’Higgins then held sway at the front with Dave Butler, Rhys Irwin and Andrew Murphy closing in. On the final corner of the final lap O’Higgins made a mistake and crashed out slowing Butler slightly and allowing Irwin to get a run on him. At the flag Butler just held on, by two hundredths of a second, to take his first Supersport win from Rhys Irwin and Andrew Murphy. Irwin took the Cup win as well as second overall, ahead of Trevor Landers and David Duffy.

Race two took place in greasy conditions, as light rain was falling, and the result turned out to be much more clear cut. Rhys Irwin took over at the front from Pole sitter Butler in the early laps and pulled out a big advantage. Behind him Butler was initially overtaken by Murphy and then on lap twelve they were both passed by Mike Browne who had ridden very impressively to come from last on the grid having missed Saturday’s qualifying and race. At the flag it was Irwin who took a maiden win on his Supersport debut six seconds ahead of Browne with Murphy third. In the Cup Owens came home second to Irwin with Landers third.

The final race was run on a fully wet track and Browne led from the front as he maintained a healthy advantage over Casey, who was now back in contention on his spare bike. Andrew Murphy was initially fourth but he worked his way past Irwin to take third at the flag, behind Browne and Casey. Irwin took an impressive clean sweep of the Cup wins on his first time out on a Supersport machine, with Oisin Maher and Dean Lacey taking the best ever results in second and third.