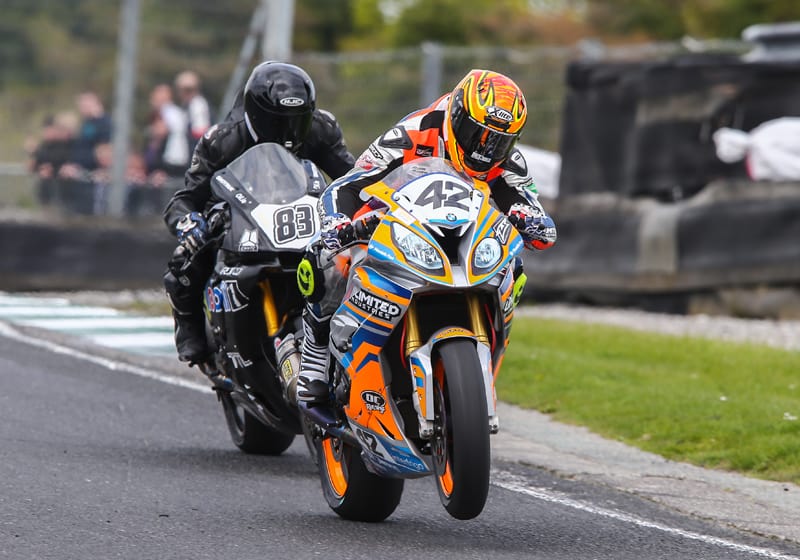 This weekend, June 22nd and 23rd, the Dunlop Masters Superbike Championship battles will continue on the National track layout. The Superbike and Supersport  riders will contest three more rounds, as the series moves towards its half way point.

The championship is currently led by Antrim’s Luke Johnston whose consistency over the first six races has helped him to move ahead of reigning double champion Richie Ryan. Ryan’s winning streak with his Yamaha R1 was interrupted last time out by Brian McCormack and with the longer International Track seemingly suiting those riders using BMW machinery, the Kilkenny man also had to give best to Johnston, who took three runner-up finishes.

Johnston goes into this weekend with a nine point championship lead over Ryan with Waterford’s Peter Moloney next up following four podiums with his brand new Suzuki. This weekend a field of fourteen Pro riders will be joined by the faster Cup riders on what will be a very competitive Superbike grid. Leading the Cup standings is four time race winner, Waterford’s Joe Grant, who has a twenty six point lead over the only other rider to taste victory this season Kerry’s Frank Doherty.

The two Supersport Championship weekends have so far produced two treble winners, with Donegal youngster Caolán Irwin taking the wins in April and Waterford’s Brian McCormack taking all three victories in May. On each occasion Corkman Raymond Casey has been their closest challenger, taking five second places, and with his focus no longer on the Isle of Man TT Casey will be looking to up his game this weekend to hang on to his championship lead.

The Supersport Cup has had three different winners and numerous podium finishers so far this season but Michael Owens treble on the International Track last time out has helped him to move into a slight championship lead. With just five points covering the top four, Owens, Ian Prendergast, Darryl Sharkey and Trevor Landers, the top spot of the podium could be anyone’s this weekend.

Darryl Sharkey, Mark Culleton and Colin Murphy have been virtually glued together at the front of the Principal Insurance Pre-Injection races all season having taken all but two of the spots on the podium. Sharkey currently leads the way but will all three having won races, the championship is still wide open.

The PCRS Bikesport Twins series is currently led by the latest star from one of Ulster Motorcycle Racing’s best known dynasties. Ross Irwin, older brother of British Superbike Championship racers Glenn and Andrew, is in his second season racing and has already found his feet with four wins to lead the Supertwins series from David Halligan. The Production class has seen some titanic battles between Jason Cash, Jamie Collins and Robert O’Connell and these three sit well clear of the rest at the head of the championship.

The remaining classes racing this weekend will be made up of Classics, who will race on Saturday only, Junior Cup and Junior Supersport (two races Saturday and one Sunday), Sidecars and Classic Superbikes who will run with the Superbike and Supersport ‘B’ competitors.

Following qualifying for all classes, racing gets underway at 12:30 on Saturday. Sunday’s racing begins at 10:40 with the afternoons racing streamed live from 12:40. Tickets for either day are available on-line for the reduced price of €12.50 with a two day ticket costing €20.00. For more information see www.masterssuperbike.ie.