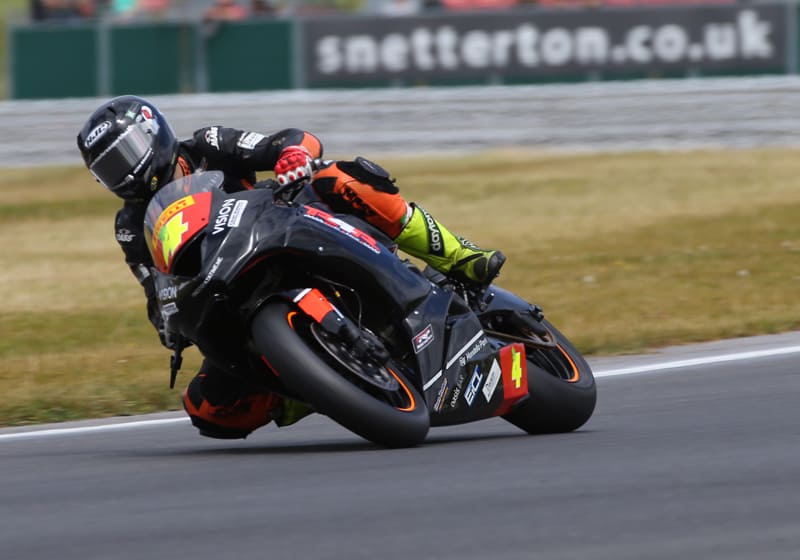 Masters Superbike Championship young Racer of the Year Caolán Irwin continued to make progress in the British Superbike paddock at Snetterton, Norfolk over the weekend of July 20th & 21st. Starting with his best qualifying performance of the season, to grab second on the grid, he finished the weekend with fourth place in the events’ single race, taking another important haul of championship points and moving into the Championship top ten.

The Donegal racer was one of a small number of riders in the championship who opted for the brand new 2019 Kawasaki ZX6R this season and it has taken time to make the new machine work to his and his teams liking. Since Round four at Donington Park Caolán has been right at the front and following a maiden podium at Brands Hatch he again ran in the lead group at Knockhill before crashing out in the latter stages. This weekend Caolán and his team made another step forward as he secured his first front row start in the championship following a blistering performance in qualifying to grab second place.

With the single Superstock 600 race scheduled for Sunday Caolán made the best preparation possible for the race by going quickest in morning warm-up. Knowing he had the pace to run at the front the Irish rider stayed out of trouble at the start and finished lap one in third place. Caolán then held station until half distance when he moved up into second and was still in the runner-up spot going into the last lap. The final tour did not go to plan however, as a lunge for second by one of his rivals pushed the Young Racer winner wide, losing him third place into the bargain.

At the flag the Kilmacrennan man was disappointed to finish just off the podium in fourth but happy with his performance. “It’s great that I have got to the stage where I can be disappointed with fourth place. Earlier in the season this kind of result seemed a long way away but we’ve made such progress over the last few events that I really feel I should be picking up podiums every time. I have to give a lot of thanks to my team, especially Wesley and my Dad for all the effort they have put in and also of course I have to thank the Young Racer of the Year sponsors who have helped enormously in making this season possible. We have a whole new challenge in two weeks time at Thruxton, but hopefully we can continue to progress there and maybe give the Young Racer Award backers their first BSB race win.”