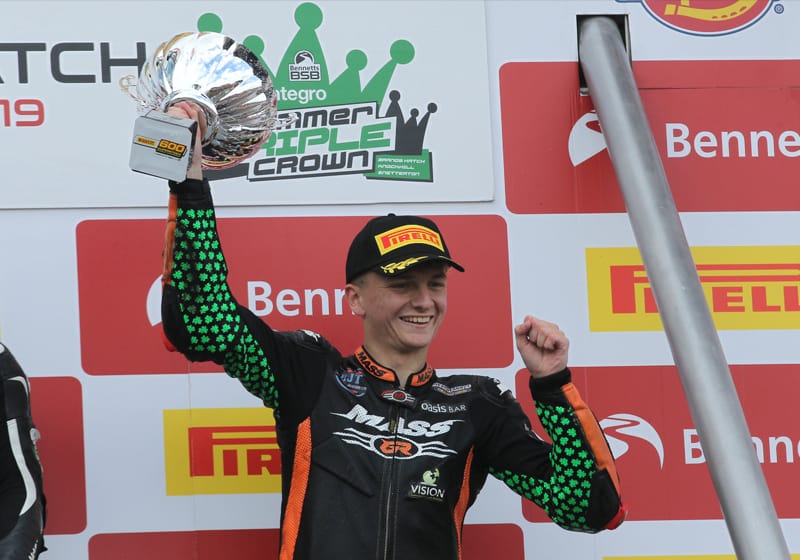 2018 ‘Young Racer of the Year’ award winner Caolán Irwin achieved his best result of the season so far when he took a podium finish at Brands Hatch over the weekend of June 15th and 16th. Riding in round four of the British Superstock 600 championship, the Donegal based rider took third place on his Kawasaki 636 to equal his previous best finish in the extremely competitive championship.

Irwin, from Kilmacrennan County Donegal is racing in the British Championship this season thanks to support form the Young Racer of the Year award sponsors, Mondello Park, Dawn International, EICL and the British Superbike Championship. Having started the year with a brand new bike, Caolán has been improving every round to the point where he is now ready to challenge for his first British Championship race win.

Practice began steadily on Friday with Caolán just under a second off the fastest time. An improvement in time in the second practice session, and again in qualifying, saw the Irish rider grab a spot on the second row of the grid for the first time since round one at Silverstone. Fastest time in warm up on Sunday morning showed just how much progress the twenty one year old has made and put him in good shape for Sunday’s race.

Come race time conditions had changed dramatically as the riders were faced with a downpour. Some quick set up changes were made and showing how much the team have progressed with the new Kawasaki the changes were just what was needed for the wet conditions.

Having made a good getaway Irwin was up to fourth by the end of lap two and after four laps he had taken the lead for the first time in the British series. In the closing stages Caolán found himself in a three way battle for the lead which was well clear of the chasing pack. Feeling confident that he could take the win, the Young Racer award winner began to push towards the front but a major slide made him rethink his strategy and he decided to settle for third and his first podium finish of the season.

“Its great to be back on the podium for the first time since Snetterton, exactly one year ago”, Caolán stated after the race “I really feel like all of the hard work is paying off now and we are close to being able to challenge for a win. I’d like to thank everyone who has helped me to make such progress this season and especially the Young Racer award sponsors, Dawn International, Mondello Park, EICL and the BSB organisers. We’re heading to Knockhill next and I’ll go there knowing I can run at the front and hungry for the victory.”