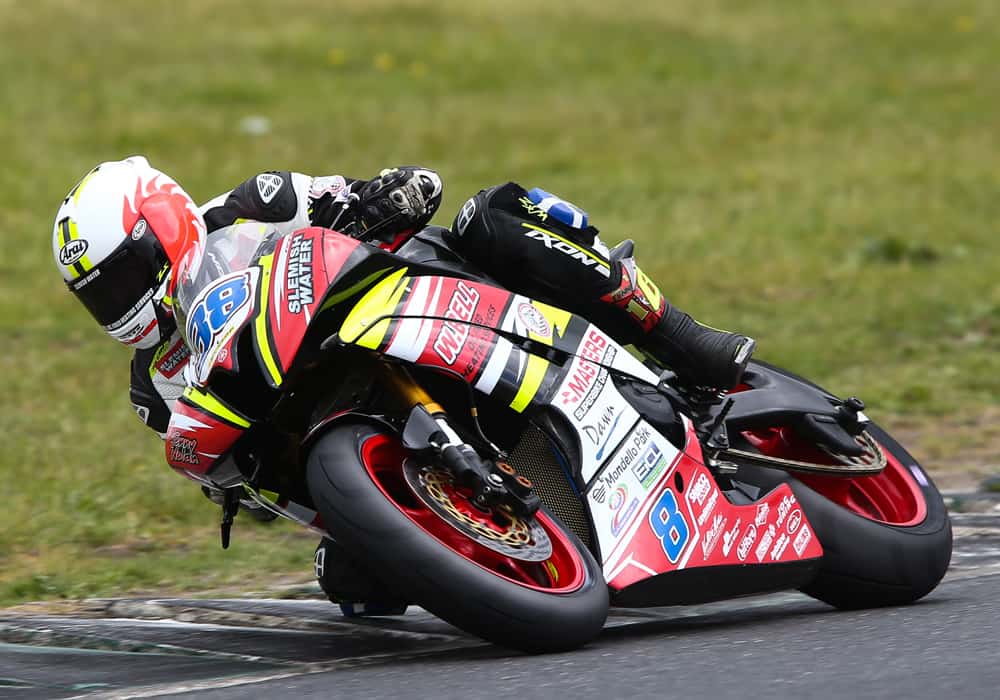 The reigning Masters Supersport champion rode his Mondello Park, Dawn International, AJ Plumbing supplies and EICL backed machine to second place in the weekends opening Supersport Elite race on Sunday and then followed up with a race win on Monday, to make it five top two finishes in a row and three race wins from five starts. Unfortunately, the Young Racer was unable to continue his podium streak in race three as he was knocked out of contention by a fellow competitor.

Due to work commitments Jason missed the pre event test day and had to learn the circuit in qualifying. Despite this he was heading the time sheets on the wet but drying track when he pushed too hard and fell. As the session progressed conditions improved and the Maghera rider dropped down the order to end up fourth on the grid for race one.

A bad start in the first race saw Lynn boxed in at turn one, dropping him down the order. A strong first lap got Jason back to third and it then took till half distance for him to climb to second. By the time Lynn was clear of his rivals the race leader was too far gone to catch and he had to settle for second to continue his recent impressive run of podium placings.

Race two saw the Ulster rider line up fifth on the grid and following a much better get away he was up to fourth by the end of lap one, despite still learning the track. Third place was his on lap three and then a move into second on the fifth tour became a move for the lead when the leader dropped out of the race. Once in the lead Lynn built a gap of five seconds before easing off slightly in the closing stages to take his third win of the season. The victory was all the more impressive as it was the first time the race winner had ridden the track in the dry. The celebrations were short lived however as the final race of the event did not go so well with Jason being taken out by a rival at the second turn of the first lap.

Speaking after his impressive performance Lynn said “It’s a pity race three came to such a sudden end as I was confident I could win again. Otherwise, it was a really positive weekend for me and my team. We’ve put a lot of work into the bike lately to get it right and now we plan to continue that work at home before returning to Thundersport at Cadwell Park in a months time to get some more wins and close down the championship leader. None of this would be possible without the backing of the Young Racer sponsors, Mondello Park, Dawn International, AJ Plumbing Supplies and EICL, so I would like to send a big thank you to them and all of my other backers.”

Jason Lynn now sits fourth in the Thundersport GB Supersport Elite championship and with his recent results he has put himself back in contention for a top three finish to his first British Championship season. Cadwell Park is next for the 2017 Young Racer of the Year, with three more rounds scheduled on September 21st to the 23rd.

For information on the 2018 Dunlop Masters Superbike Championship CLICK HERE.