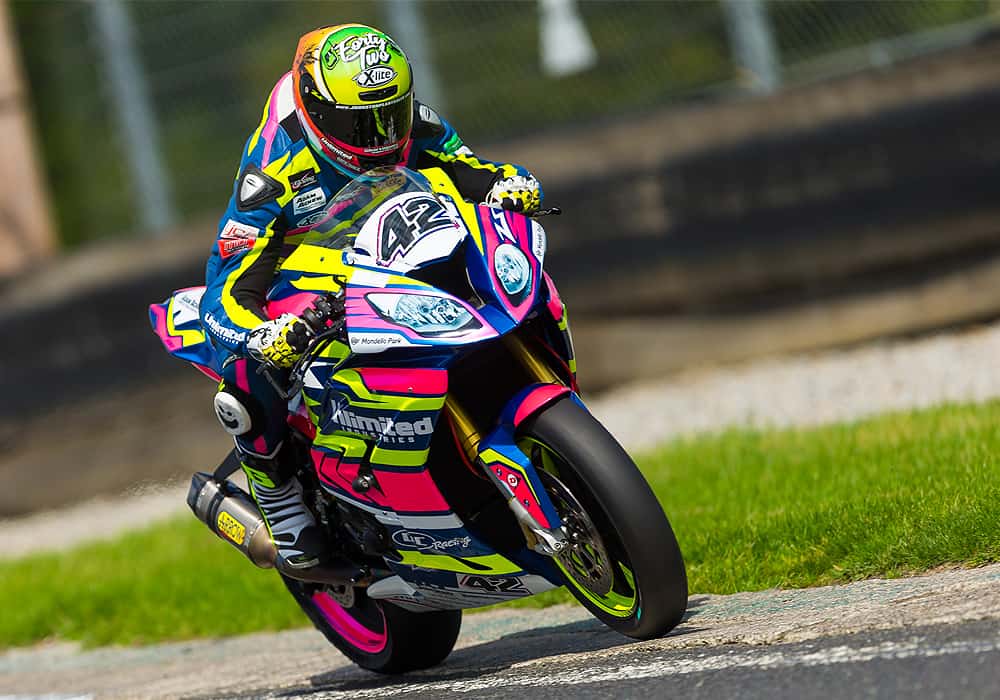 Following a dozen wins in a row, Richie Ryan’s domination of the top step of the Dunlop Masters Superbike Championship came to an end on the Mondello Park International Track over the weekend of August 25th and 26th as Ballymena’s Luke Johnston finally took his first Superbike wins. Ryan, from Kilkenny, was still the one celebrating as second place in race three was enough to wrap up the 2018 Championship.

The Dunlop Supersport battle continued to be between Dean McMaster and Emmett O’Grady, but following the latest three rounds the championship is more open than ever as McMaster will head to the final event of the season with a slender twelve point lead, if he makes it back in time from an injury sustained in a race three fall.

Despite taking pole position for race one, Johnston’s BMW was jumped off the start by the Yamaha of Ryan and the BMW of Moloney. The race then developed into a three way battle as the BMW’s put pressure on the leader but Ryan held firm to take his twelfth win in a row with Moloney second and Johnstone third. Another tight ‘Cup’ battle went to Michael Prendergast from Chris Campbell and Jamie O’Keefe.

Race two saw Johnston finally nail his start and by the end of lap one he was already building a lead over Moloney, who was under pressure from Andrew Murphy’s Kawasaki. Murphy got past at the end of lap two leaving the BMW to fend off Ryan who had James Kelly right on his tail. The race was stopped due to an incident on lap five, but by then Johnston had built a comfortable lead over Murphy, as he took his first ever Superbike win. Murphy came home second, while Moloney held off Ryan and Kelly, knocking the series leader off the podium for the first time since round three. The race stopping incident involved the top two Cup riders, Michael Prendergast and James Rowe, handing Chris Campbell his fourth Cup win of the year ahead of Gary O’Brien and Dean O’Grady.

Johnston got another good start in race three to get away ahead of Ryan but Moloney did even better and took the lead. Moloney’s glory would be shot lived, as he crashed out on second lap leaving Johnston clear to cruise to his second victory of the day. Ryan fell away almost into the clutches of Murphy and Kelly who were fighting over the final podium place. This battle was decided at the start of the last lap when Kelly pulled the move of the day to out-brake his rival and secure his third podium of the season. The Cup race saw Chris Campbell battle past Gary O’Brien to take his second win of the day. O’Brien was also passed by Prendergast who had Darryl Sharkey for company but O’Brien was able to hold off Sharkey for the final podium place.

Moloney crashing out of race three handed the 2018 Superbike title to Ryan, who became the first rider to retain the championship. Johnston has now closed in on Moloney in the championship chase and could take second at the final event in five weeks time. The cup battle is closer than ever, with Campbell leading the way for the first time, from O’Brien and Prendergast, with seven and a half points separating the top three.

Neither Dean McMaster or Emmet O’Grady had a weekend to remember as both did their best to damage their own championship challenges. McMaster picked up where he had left off at the previous event by winning race one from O’Grady but the Antrim rider then undid his good work when he crashed out of third place in race two allowing his Tralee rival to close the points gap considerably.

McMaster got away in the lead of race three and looked like he had regained his advantage when his rival crashed out of the race at Paddock corner but he then also fell off, bringing the race to a halt and handing a maiden overall win to Keelim Ryan. The race three podium featured a delighted Ryan who not only picked up his maiden overall win, and the Cup win, but also secured the 2018 Supersport Cup title.

The Dunlop Masters Finale takes place in five weeks time on the Mondello Park National Track with The Supersport and Superbike Cup titles still wide open and a huge battle likely for second place in the Superbike championship.

All of the information on the final Dunlop Masters Superbike Championship event of the season is available from www.masterssuperbike.ie. Tickets are also available to book on-line at the reduced price of just €12.50, with under sixteen’s admitted free.