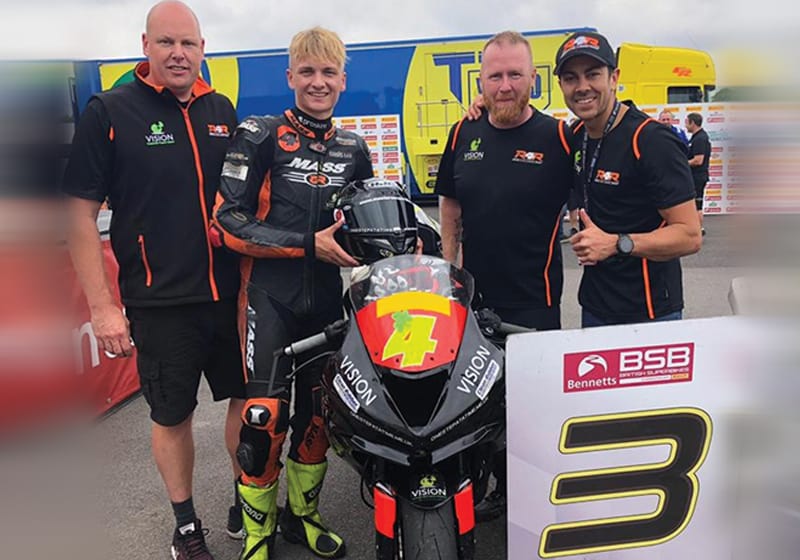 Caolán Irwin continues to impress with another British Championship podium

Masters Superbike Championship Young Racer of the Year, Caolán Irwin, continued his strong form in the British Superstock 600 championship at Thruxton last weekend (August 2nd to 4th), as he took his second British Championship podium of the season with an impressive third place.

Thruxton circuit is one of the fastest and most difficult to master of all of the circuits on the British Superbike Championship calendar, but Caolán’s Ready 4 Racing team did a superb job across the weekend as he gradually moved towards the front of the times. The Donegal rider sat sixth after first practice, just over a second off the top spot.

By the end of the second session the Oasis Bar, Clean Rubber and PCRS Bikesport backed bike was still sixth but the gap had closed to less than a second. A further improvement in qualifying pushed the Irishman onto the front row of the grid for the first time as he closed the gap to two tenths of a second.

Racing at Thruxton is always tight and unpredictable, due to its unique layout with its emphasis on high speed corners and slipstreaming, so it’s important to stay in the lead group until the closing stages. Having got away with the lead pack Caolán crossed the line in his starting position at the end of lap one, but the next two laps saw him drop to fourth place, while crucially still in the lead battle. From lap four onwards the Ready 4 Racing Kawasaki was never lower than third place as the Young Racer of the Year battled to keep himself in the mix for the final lap sort out.

Going into the last lap there was nothing in it between the top ten riders, but with Caolán under mounting pressure for his third place he was unable to mount a challenge for the victory as he instead defended his position to secure his second podium of the season. At the flag the gap to the leaders had grown to a second and a half but crucially Caolán had a quarter of a second margin over fourth place as he continued his impressive run of results since his first points scoring finish at Donington in May.

“That was fantastic” said Caolán following his podium. “Once again the team have given me a great bike and I’m delighted to be able to reward them and all of my backers with another appearance on the podium. I’ve put myself in contention for a top three finish in the championship now and the only thing left for me to do is to grab that first win, which I know is coming. Hopefully we can make another step forward at Cadwell in two weeks time and continue the great from we have shown over the last five races.”

Caolán Irwin will be back in action in two weeks time as the British Superbike Championship makes its annual visit to the tight and twisty Cadwell Park circuit on August 16th to 18th.

For more on the Young Racer of the Year programme and the Masters Superbike Championship see masterssuperbike.ie