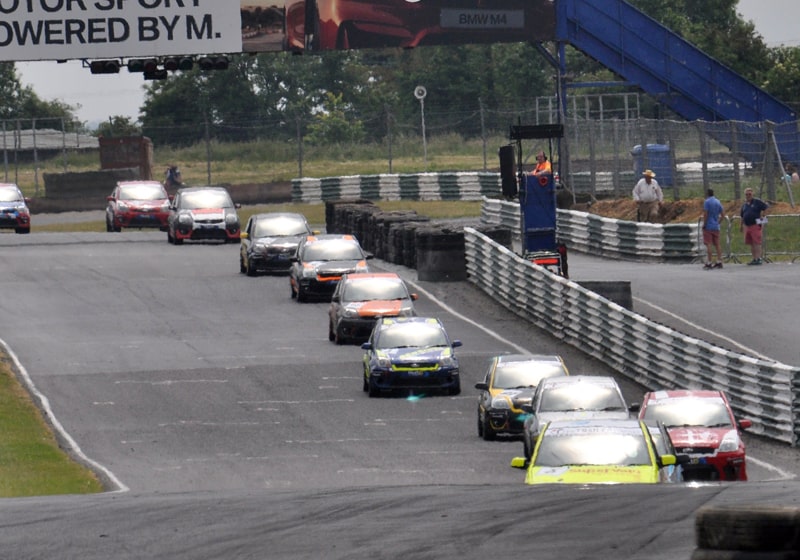 Headlining Saturday’s action will be a double header for Ireland’s fastest race series, Formula BOSS Ireland. The series for powerful single seater race cars is having a strong season assisted by an influx of new machinery, including a number of Formula 3 cars and the ex ‘World Series’ Dallara of Paul O’Connell. O’Connell’s car is one of the most powerful and fastest ever raced in the series, but around the tight confines of Mondello Park it can be challenged by the more nimble Formula 3 and Formula Renault cars making the result less than certain.

Headlining the action on Sunday will be the two Fiesta classes, the Keelan Construction Fiesta Zetec Championship and the Denning Cars Fiesta ST Championship. Following qualifying and a single race on Saturday, the two biggest grids of the weekend will contest double headers on Sunday.

The Zetec class is led by Eoin Purcell, from William Kellett and Darren Lawlor, and these three will start as favourites to taste victory. In the ST championship, for faster and more modern Fiestas, Eric Holstein is the man to beat with four wins from five races so far. Karting graduate Alex Denning is his closest challenger, having taken the other victory, but needs to start beating the championship leader if he is to have any chance of halting Holstein’s march to the title.

Alongside the BOSS cars and Fiestas, Saturday’s programme will include double headers for an impressive grid of Stryker Sportcars and the always interesting HRCA Historic Cars. On Sunday the Fiestas will complete their triple header and will be joined by a supporting cast made up of two races each for Closed Wheel Libre and Formula Sheane, alongside another triple header for Legends.

Saturday’s race action gets underway at 11:45, while Sunday’s racing has an earlier start of 11:10. Admission to each day of the event is normally €15.00 for adults, with under sixteen’s admitted free, but tickets are available on-line for the reduced price of just €12.50 per day or €20 for the weekend.

For more information and a timetable see HERE.