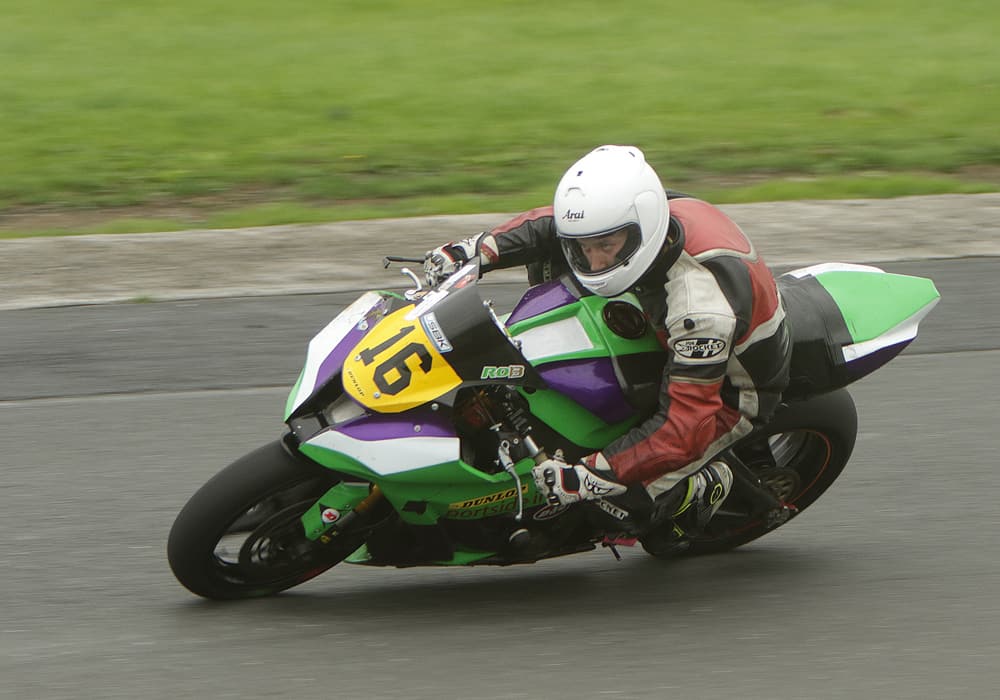 The 2018 Dunlop Masters Superbike Championship ended with a flourish at Mondello Park this weekend, September 29th & 30th, on the Mondello Park National Track. The high quality entertainment included a nail biting conclusion to the Superbike Cup battle, the race of the year in Superbikes and the closest finish of the season in Supersport.

At the start of the weekend the battle for Superbike Cup honours was the big talking point as three riders entered the final event separated by seven and a half points. Chris Campbell led the way from Gary O’Brien and Michael Prendergast, but the series leaders’ challenge looked to be in jeopardy on Saturday when an accident in qualifying Injured his arm and damaged his bike.

Campbell’s qualifying crash left O’Brien as quickest of the cup riders. ahead of Prendergast and Campbell. A terrible start by O’Brien in race one dropped him to fifth in the cup as Superbike newcomer Keelim Ryan took over at the front. Campbell was next up, despite riding a hastily repaired bike and suffering from severe arm pain. At the flag Campbell was happy to get to the finish ahead of his rivals even though he was beaten to Cup honours by class rookie, Ryan, while Prendergast and O’Brien kept themselves in contention with third and fourth.

Having had the chance to rest overnight Campbell came back stronger for Sunday’s second encounter and was running second in the Cup standings when leader O’Brien crashed out on lap two, ending his championship challenge. O’Brien’s demise left Campbell to cruise home with Keelim Ryan as a buffer between himself and Prendergast, making the Cup title almost secure. The final race again saw the highly impressive Ryan take the win but Campbell’s second place was enough to secure the crown following the most competitive Superbike Cup championship in the history of the Masters.

In an effort not to be outshone by the Cup riders the overall Superbike races produced some frantic action. Richie Ryan won the first two races easily but behind him the battle for runner up spot in the championship raged. Peter Moloney took second on Saturday ahead of Luke Johnston with the positions reversed in Sunday’s first race. The Superbike racers then kept the best till last as Moloney and Ryan had a titanic tussle in the final race of the season.

Moloney led for the first ten laps, with the top two never more than a bike’s length apart. Ryan tried everything he knew to get by but was repelled at every attempt until the end of lap ten when he finally outbraked Moloney at the final corner to re-assert his dominance. Moloney continued to push and kept the pressure on right to the flag but had to give best to the 2018 champion. James Kelly got the better of Luke Johnston in a similar battle for third meaning Moloney secured second in the championship.

Emmett O’Grady was crowned Supersport champion following a third place finish in Saturdays opening Supersport race which was won by returning British Championship racer Aaron Wright from fellow BSB competitor Caolán Irwin. A coming together between O’Grady and Wright in race two put Wright out and allowed Irwin to take his first Supersport win, ahead of Ryan, with O’Grady fighting back from thirteenth place to snatch third.

he final race saw Irwin lead until he fell off at the esses on lap three, leaving O’Grady to lead from Ryan. Wright meanwhile was battling from seventh on the grid and moved past Ryan at half distance before closing the gap to the leader. Going into the final corner the top two were nose to tail with O’Grady defending hard. Too tight an entry into the final corner for the race leader allowed Wright to get a better run off the turn and he then pipped O’Grady to the flag by one thousand of a second, the closest finish of the season. Ryan finished off his exceptional Superbike Cup campaign with another class win and overall podium in third place.