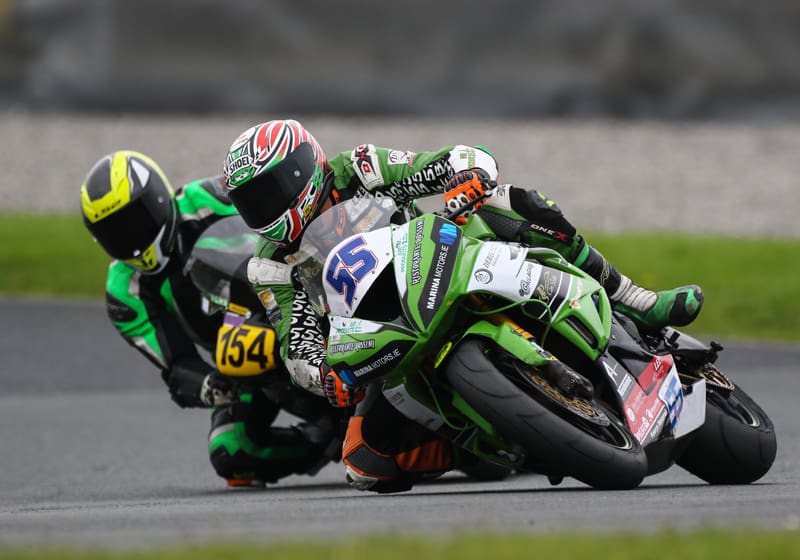 The penultimate event of the 2019 Dunlop Masters Superbike Championship saw the Superbike and Supersport Championship leaders both maintain their lead following an incident filled weekend on the Mondello Park National Track, but both battles will go down to the wire as the point differences remain tight.

Richie Ryan won both of the Superbike races that were run, as delays on Saturday, caused by accidents and an oil spillage, caused the cancellation of most of the afternoons racing. The Supersport Championship did complete its full programme and it was Andrew Murphy who scored best as he closed the gap to championship leader Raymond Casey.

Having suffered a mid season dip, Kilkenny’s Richie Ryan was back on top form on Sunday as he won Superbike race one form Pole position and then came through from a second row start to take another comfortable win in race two. Behind him Luke Johnston from Antrim grabbed two second places to keep the points gap to a minimum and take the championship to the final three rounds in September.

Following the top two home was Dubliner Thomas O’Grady as he twice held off the resurgent James Kelly, from Mullingar, to complete the podium. In the Cup class Dungarvan man Joe Grant was dominant once again as he added two more victories to his tally. Frank Doherty from Kerry harried him in the early stages of each race but fell away late on while still holding on to two second places. Third in both races was class returnee, Declan Madden from Dublin, who performed extremely well considering his four year absence.

The all Munster battle for the Supersport crown continued through two of the three races. Ray Casey’s first race fall allowed Limerick rider Andrew Murphy to take a big bite out of his championship lead with a first Supersport win. Casey then fought back to take his first wins in the class, which helped the Corkman to open back out his advantage.

Cavan based Darryl Sharkey took a huge step towards the Supersport Cup title as he overhauled previous championship leader Ian Prendergast from Tipperary, who failed to take the start of any of the races following technical issues. Sharkey won the first race from Cashel teenager Oisin Maher with Ulster rider Michael Owens third, Following another win for Sharkey in race two, this time ahead of Owens, the Tyrone youngster beat his more experienced rival in a photo finish in race three.

Sharkey was also a winner in Principal Insurance Pre-Injection race two, when he took over at the front on the final lap from Cian Donaghy, who ran into fuel pressure issues. Earlier Donaghy had taken his first ever Masters win from Sharkey to move into contention for a top three championship finish.

The PCRS Bikesport Supertwins produced the race of the weekend in Sunday’s second encounter, when a group of five bikes battled for the entire race. The result was in doubt till the end as teenager Nathan McGauran crashed out of the lead as he misjudged a move to pass a backmarker and then Robert O’Connell and Jamie Collins proceeded to swap the lead numerous times every lap. O’Connell eventually the victory as he, Collins and Jason Cash all crossed the line together. O’Connell had earlier beaten Collins and McGauran in Sunday’s opener and with all of the top positions filled by Production machinery Ross Irwin secured the Supertwin Championship without turning a wheel as he opted to make his Superbike debut instead.

The final rounds of the Dunlop Masters Superbike Championship will run on the Mondello Park International Track on September 28th & 29th.

For more on the 2019 Dunlop Masters Superbike Championship see www.masterssuperbike.ie.