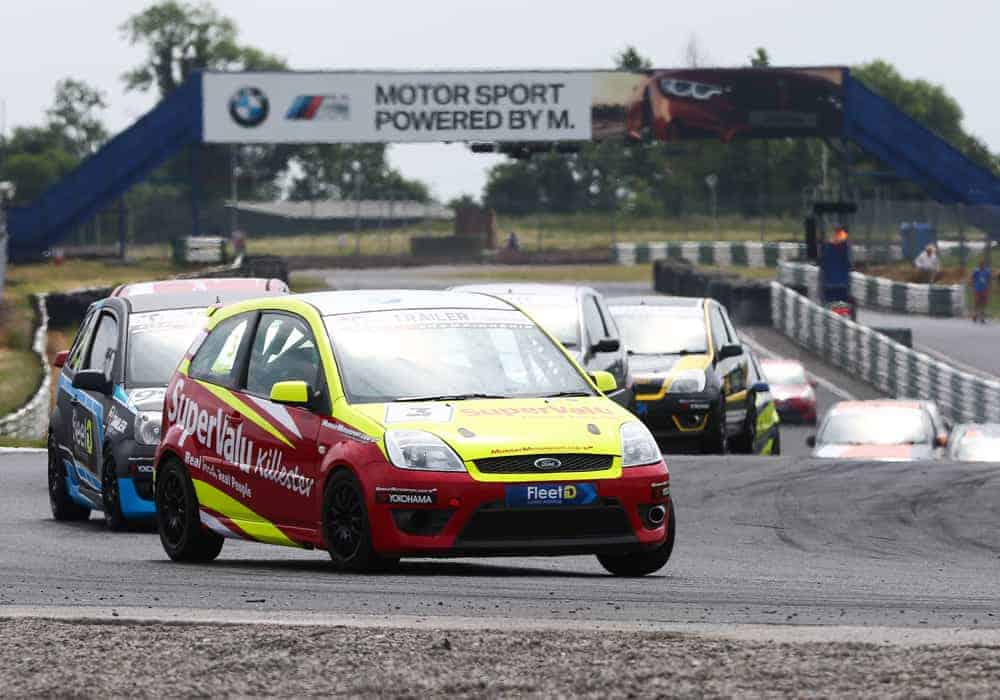 Racing on the reversed Mondello Park National Track for the first time, the Fiesta ST championship proved to be the highlight of Sunday’s programme with Cullen taking his third win of the year and Graham McDonnell taking his first, to make it five different winners from the first seven races of the season.

Despite the new track layout. it was the championship top two who populated the first row of the grid following qualifying, with Maguire taking pole by less than two hundredths of a second. When the lights went out to start race one it was Cullen who got away best to lead from fourth placed starter Darragh McMullen, in the colours of championship sponsor ‘The Trailer Company’, and reigning champion Maguire.

Over the first half of the race Cullen gradually opened his advantage, but from lap eight onwards both McMullen and Maguire were quicker than the leader on every lap as they closed the gap. At the flag the margin had reduced to less than a second between first and third, but Cullen used all of his experience to hold on for the win. McMullen’s second place was not enough to reduce his points deficit to Maguire whose points for third, added to the bonus points for pole position and fastest lap, meant he scored one more point than McMullen. Trevor Farrar came home fourth from Barry John McHenry with Graeme McDonnell’s sixth place giving him pole for race two.

The second race would prove to be very different to the first for the championship contenders as an opening lap coming together effected all of the top three from race one. A large portion of the field were either involved in the incident or delayed by it and at the end of the first tour Maguire was out, while Cullen had dropped to eighth place and McMullen fourteenth.

At the front McDonnell had made the most of his pole position and taken a lead he would hold to the flag, despite the pressure exerted by McHenry. Behind them John Denning was fighting hard to improve on his eighth place in race one and had worked his way up to third, taking fastest race lap on the way. All eyes however were on Cullen who was fighting back and by the end of lap ten was up to fourth. That would be as far as the series leader would get however, as the gap to the front three was too big to cross. At the flag McDonnell took the win from McHenry and Denning, with fourth place for Cullen enough to grow his championship lead over the now absent Maguire.

‘The Trailer Company’ Fiesta ST championship continues its season on July 7th & 8th with a return to the Mondello Park National Track.

To keep up with the latest news and results from the championship go to facebook.com/FiestaSTChampionship.