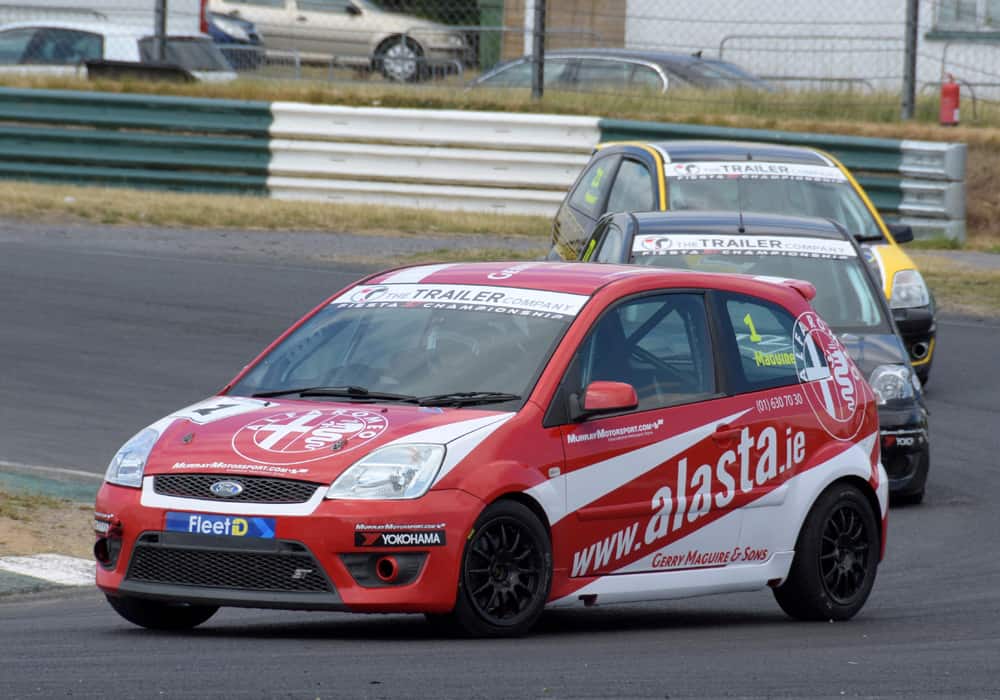 The Final double header for the 2018, ‘The Trailer Company’ Fiesta ST Championship produced a cliff hanger with the championship going right down to the final lap of the year at Mondello Park today, Sunday September 16th.

David Maguire from Ballsbridge, began the weekend trailing fellow Dubliner Michael Cullen by ten points, but with each driver required to drop their two worst scores, Cullen would be able to count two fourth places finishes even if he did not score in either of Sunday’s races. Adding Cullen’s guaranteed points to his total gave Maguire a target of thirty four points from the two races, if he was to take the title. On top of this target he would also need to keep Cullen behind him in both races.

As strong as Maguire’s start to the weekend was, taking two bonus points for second in qualifying, more significant was Cullen’s performance, as a rare mechanical failure left him last on the grid for race one. A perfect start saw Maguire leap into the lead and with a clear track ahead he was able to set his own pace on his way to a third victory of the season and the additional bonus point for fastest lap. Series sponsor, Limerick’s Darragh McMullen, brought his ‘The Trailer Company’ ST home second, ahead of Graham McDonnell from Dublin, to consolidate his third place in the standings. Cullen finished seventh adding twelve points to his total and giving Maguire a single point championship advantage.

The top six positions were reversed for race two leaving Maguire just one place ahead of Cullen on the starting grid. Despite now holding the championship lead, the complicated dropped score system meant the race one winner still needed to finish higher than fourth and ahead of Cullen to be victorious. A good start by both drivers saw them run side by side around the first two corners, but when the dust settled Maguire had kept his rival at bay and was just where he needed to be, in fourth.

For the rest of the race the two championship chasers followed each other, with the gap fluctuating from nothing to around a single second. Cullen had a number of attempts at a passing manoeuvre, but was never really close enough until the second last lap when, having caught the second and third place dice, Maguire was slowed and Cullen attempted to run around his outside at the first turn. Maguire once again held on and got to the flag in fourth place to win the championship by less than half a second.

Up ahead it was a trio of Dubliners on the podium as Darren O’Driscoll, took his first Fiesta ST win ahead of a race long battle for second between veteran Gordon Kellett, who had his best result since returning to racing this season, and Graham McDonnell, whose second podium of the weekend allowed him move into joint fourth in the championship with Barry-John McHenry.

Having gone into the final race weekend of the season with a mountain to climb, David Maguire somehow overcame his points deficit to championship leader Michael Cullen, to lift the 2018 Fiesta ST championship, make it three titles in a row and remain as the only driver to have won the Mondello Park promoted Fiesta ST series since its creation in 2016.