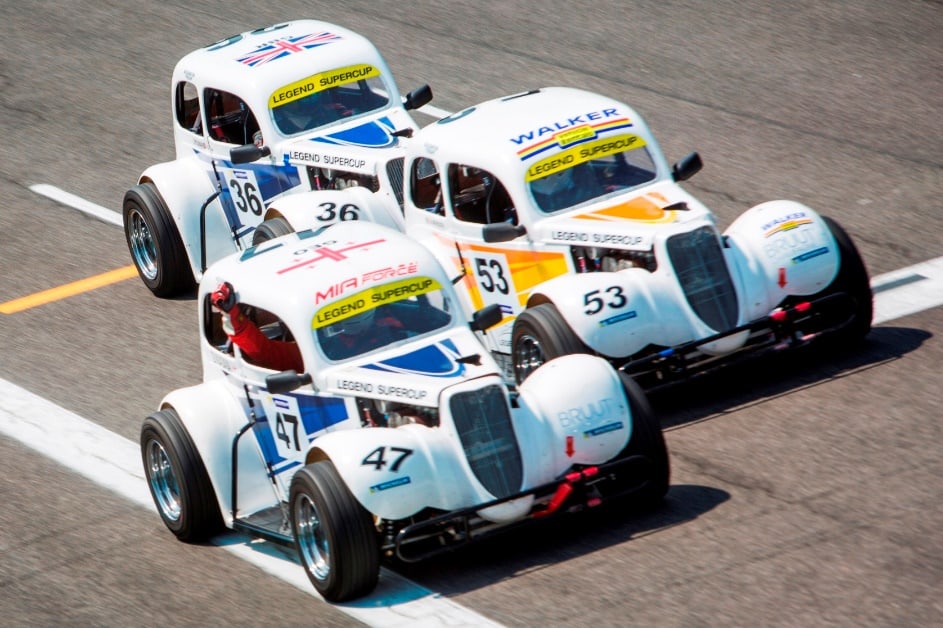 Legends Cars are created by 600 Racing, in America in 1992 to provide a fun and affordable racing opportunity in which anyone (experienced or inexperienced) could compete. The shape of the car has not changed since then meaning the car never dates and the cars keep their value. This series fights the high costs involved in racing and the rules are strictly enforced to ensure safety and cost control.

The cars feature a Yamaha XJR 1250 sealed motorcycle engine which produces approximately 125 horsepower. Horsepower is not a significant factor in the legends Cars Series because the rules require the use of a control tyre that is of a moderately hard compound which will last a full season and then some, thus keeping the tyre costs much lower than other formula. The “hard” spec tire and narrow wheels do not allow a driver to utilize all of the power from the engine thus eliminating the need to spend more money for extra horsepower.
A full tubular roll cage sits atop the frame rails which are firmly braced. The cars utilize a recycled Toyota rear end, front disc and rear drum brakes, rack and pinion steering, Bilstein coil-over shock suspension on all found corners, and is fitted with a four-gallon fuel cell
The only adjustments that may be made are, front camber, caster, tyre pressure, spring rates and the weight distribution by setting the coil over suspension thus keeping the “cheque book” out of the formula

Legends Cars require about three to four hour’s simple maintenance between races. Maintenance that can be carried out by an accountant, doctor, or house wife, you need no special mechanical qualifications. The program includes cleaning the car, changing the oil, checking all fluids, cleaning the air filters, checking the tightness of all bolts, checking for broken or damaged parts, and setting up the car for the upcoming race

How many cars in competition today?

To date there are more than 6,500 in existence in USA, Canada, Mexico, UK, France, Spain, Belgium, Holland. Finland, Sweden, Denmark, Italy, Portugal, Russia, South Africa, Australia, Japan, Malaysia and now Ireland making it the largest global class racing in the world. Legends Cars can be bought and sold all over the world as they are identical in every country. Legends Cars drivers come from all walks of life and range in age from 12 to 80. There are car owners worldwide, and the series is gaining momentum with every race. This incredible growth has made the Legends Racing Series the fastest growing form of motor sports in the world today!

One of reasons for the success of the Legends Car is undoubtedly the car’s appearance. These fiberglass-bodied cars are almost exact replicas of the 1934 and 1940 Ford, Chevy and Dodge cars that founded the grassroots of racing in the USA as we know it, and remain extremely popular today. Unlike larger, full size cars, the Legends Car has a “cute” appearance at first glance, but 125 horsepower of YamahaXJR1250 will quickly dispel and notions that this race car means anything but business.

Irish Legends, putting the fun back into racing in Ireland

For further information on tracks raced in Ireland check out our Facebook page, “Irish Legends” or contact Ed Meredith on 087 2488808 or indeed any of the drivers at a race meeting