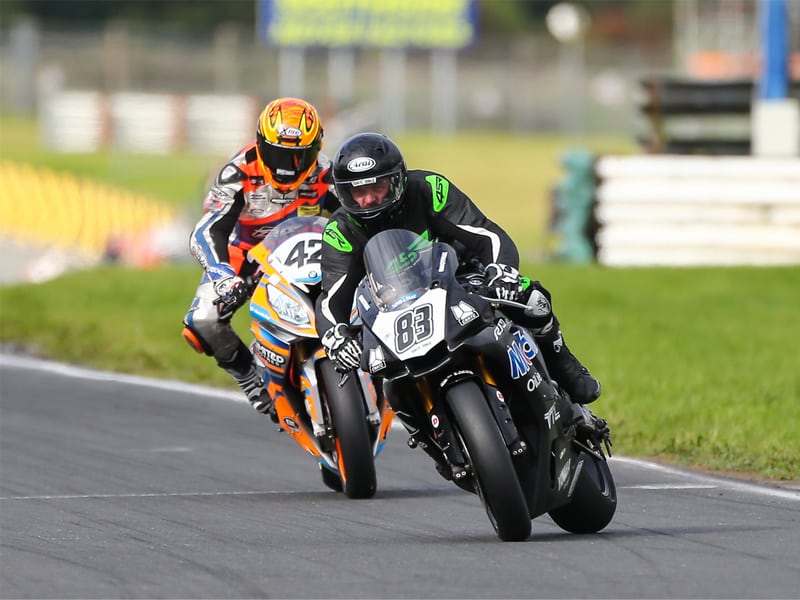 The blue riband of Irish Motorcycle Racing is the Masters Superbike Championship. Superbike racing is for four cylinder bikes of 750cc or over and twin cylinder machines of up to 1200. The top level of the Superbike class is reserved mainly for experienced racers who have worked their way up the ranks, or riders with many years of experience of other racing disciplines such as Supermoto or Motocross. Less experienced racers can compete once they have the required licence and like Supersport the grid at the Masters is a mixture of brand new and older machinery and there is also a wide variety of levels of performance from the bikes and professionalism of the riders. Whatever level Superbike competitors are capable of competing at there is a race for them where they can compete with bikes and riders of similar ability. Following qualifying the fastest riders go into the championship race while the slower riders combine with the slower Supersport bikes in the ‘B’ Race. To encourage less experienced and improving riders they have their own championship within the main championship called the ‘Cup’. Cup riders compete for overall honours as well as Cup points, prize money and trophies while Pro designated riders can only score overall points.

Who can race these bikes?
Any rider who is over eighteen and has a short circuit or short circuit Intermediate novice licence is permitted to compete, although it is recommended that riders begin in one of the less powerful classes if they are complete novices. Superbike is the top level of racing at the Masters with the fastest bikes, most experienced riders, most professional teams, most competitive field and the biggest race budgets. For racers who do not have ambitions of racing internationally this is the top level at which they will ever race and it is the aim of many young racers to reach this level.

What bike should I go for?
As Superbike is one of the most competitive classes, inexperienced Superbike racers are advised to go for either a very new road bike or a proven race-prepared bike. Many of the current road models of bikes used in Supersport come with more than enough power from their standard engines and are already equipped with adjustable suspension, traction control and almost everything else required to go racing. A Superstock (almost standard) machine is capable of racing competitively in Ireland and many riders have won Superbike races in Ireland using Superstock spec bikes. If going for a used machine, bikes previously raced by experienced teams or built by professional outfits will give the best value in the long run. As with other classes, buy the best you can afford. Yamaha, Kawasaki, BMW and Suzuki are widely used at the Masters and parts are readily available for all of these makes along with help and advice from others using the same machinery.