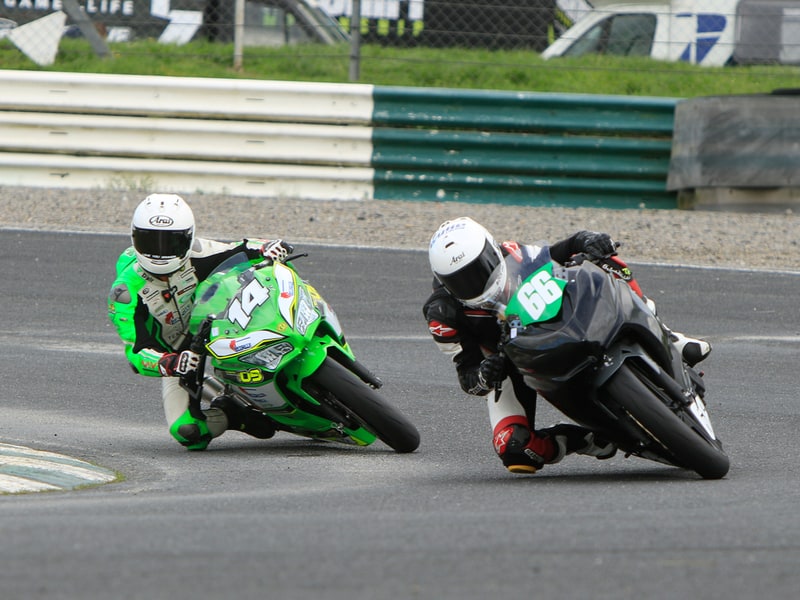 What is this class?
Running alongside the Moto ONE class is Junior Supersport. The bikes are a step up from the Junior Cup bikes which run in Moto ONE for a number of reasons. Additional modifications are allowed for one, and the bikes have more horsepower and a bigger engine size limit (400cc). Air restrictors, engine rev limits and weight limits are specified for each make of bike eligible for the class and the bikes are closely monitored and may be adjusted where necessary to ensure that the different bikes being used remain competitive with each other. Junior Supersport machines are approximately two seconds a lap quicker than the fastest Moto ONE bikes around Mondello Park. One advantage of the Junior Supersport class over the Moto ONE class is that the bikes are built to an international set of regulations and can be used to compete abroad with very little modification.

Who can race these bikes?
Riders from twelve years old can race these machines with no upper age limit. The Junior Supersport class races are combined with the Moto ONE machines which can also be ridden by Junior riders.

What bike should I go for?
Eligible Bikes

The three main bikes used in the class are the Kawasaki 400, Yamaha R3 and KTM 390. The decision as to which to go for is personal preference as the equivalency measures built into the regulations should make all three capable of winning despite their different performance characteristics in standard form. Prices vary for the bikes second hand with the KTM 390 often available at lower prices due to it being the older of the three machines.

Riders who have raced in the Junior Cup can easily upgrade their machines to Junior Supersport as they progress through the ranks by adding a quick shifter and some other parts.