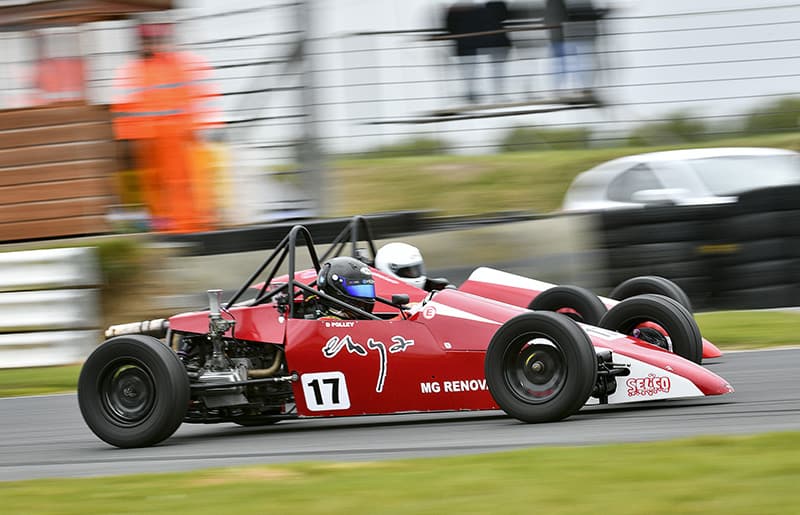 In Ireland, if you want to go single- seater racing (Formula 1-style) then this is the class for you. Formula Vee, which came to Ireland in the mid-1970s, has been described as the biggest, most affordable, most competitive, single-seater racing formula in Ireland. Formula Vee remains a very affordable class of racing. Vee’s now boast the highest popularity with over 40 members in the Association, and about 20-30 of those regularly competing.

The cars utilise as many standard VW parts as possible and parts are still readily available at low cost. For example, the engine and gearbox are from a the 1600cc air-cooled VW Beetle. The front and rear axles are standard VW beetle Beetle parts, as are the drum brakes. Just to note, front disc brakes are also allowed. Formula Vee cars also use steel rims and track tyres. Racing shock absorbers and springs are allowed, as are non-standard rack-and-pinion steering.

Formula Vee is a limited budget class and there are strict rules regarding the amount of modifications allowed to the vehicle. Basically the engine, carbs, brakes and axles must remain standard in order to avoid the high cost of maintaining performance engines as usually associated with other classes. Some mild tuning/blueprinting is permitted in accordance with the class regulations (specified in the Motorsport Ireland Yearbook) in order to increase performance.

The performance of the cars is remarkable given their ‘standard’ configuration. Most cars are typically capable of speeds up to 170-180 km/h and they are only a few seconds off the lap times achievable with the more expensive formulae. A Vee is also capable of lapping Mondello Park quicker than a Porsche 911, though it must be said that you don’t won’t get to enjoy the brilliant stereo and leather seats of the Porsche!

The cars weigh 385 kg with a minimum combined driver and car weight of 485 kg.

How much do these cars cost?
The cars range in price from €3,000 at the lower end to €8,000-€10,000 at the higher end. A car at the lower end of the scale, can be a great way to get on track and start racing, but would need some work to make it competitive at the front of the grid. Cars at the more expensive end of the scale are regular race winners and would have more than likely won multiple national championships and would be capable of regularly winning races.

How do I drive these cars? What are the Llicence Requirements?
A National B license is required. This is provided by Motorsport Ireland. Y and you will need to complete an ‘Introduction to Motorsport’ course, which is held at Mondello Park.

Tell me something interesting about this class
Formula Vee originated in America in the 1950s and remains active all around the world. Early racers included future world champions Niki Lauda and Emerson Fittipaldi, while more recently, former Toro Rosso racer Brendon Hartley started his racing career in Formula Vee in New Zealand. Emerson Fittipaldi donated a trophy to Formula Vee Ireland many years ago to commemorate his time in Vee’s and a special trophy race is run for this prestigious trophy every year.